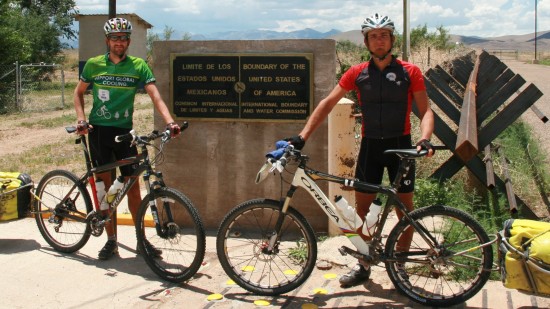 Our last day started out wonderfully well. We had slept under the stars in the desert, woke before sunrise and were on our bikes as soon as it began to get light. The air was cool (ish) and the trail was good, and although we were a little bit sad that it was the last day of the ride, I think both Marco and I were excited about reaching our goal; the Mexican border post of Antelope Wells.

We still had about 80 miles to go, including the infamous (among Divide riders) Lonely Highway; the seldom used road that covers the final 45 miles from Hachita to Antelope Wells.  Naturally, it is uphill (if only very slightly) and of course we were riding into a headwind but the hardest thing about the road was the complete lack of traffic; I counted around 15 cars during those miles, and most of those were Border Patrol vehicles.

The silence gave me plenty of time to reflect on the trip overall. It seems like light years ago since we left Banff, but at the same time, the trip had gone by so quickly. I wasn’t sure whether I wanted it to end or not. Maybe we could carry on into Mexico and make a trail all the way down to Argentina and beyond…..? Or maybe the thought of a long lie down in an air-conditioned room was too tempting!

As the miles ticked by, I seemed to gather more energy and by the time I reached the five miles to go mark I felt fresher than I did when we started out in Banff! Crossing into the border post was a great moment for me. For just about a year, I’d been thinking about this moment and it was finally happening. So many times I’d thought that I wasn’t going to make it, but I guess that makes the achievement even more special to me.

I’m going to write more about the trip in the coming weeks, and the promised photos will be up here soon too, but firstly some huge thank yous:

Firstly, I have to thank Marco for putting up with me for five weeks - I’ve learnt a lot from him and I’m sure that his patience must have almost run out on several occasions, with my slow pace and general lack of biking skills.

Thanks also to everyone who has read, commented on and enjoyed this site. I wish we could have updated it more frequently, but I know that the SPOT tracking kept at least a few of you very busy indeed!

Massive thanks to those who have looked after us along the way; Shannon and Crystal in Calgary, Rob and Ingrid in Canmore, Amy in Boulder, Heike in Silverthorne, Gary and Patti in Del Norte and all the excellent folk in the bike shops we’ve stopped in along the way.

All the people who have stopped in the street and asked us about the trip and shown real interest in what we are doing - you’ve really surprised us with your interest and knowledge, adding a real human dimension to our trip.

Thanks also to Alan and Ollie for sharing the pain along the way - much appreciated. And if you haven’t been thanked in person, and you’re reading this - thanks to you too.