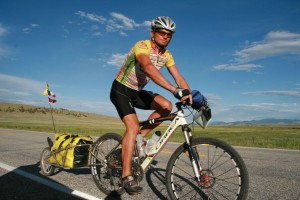 As far as I can remember from all the travels I’ve done and experiences I had, this one goes in the top 5! When I’m looking back where it started, it makes me smile and remember me how incredible it is to travel and to meet people.

I liked this trail very much because it gave me a total different view of the USA and the people living there. We went through small towns most of the time, places where you wouldn’t go and visit if you were coming from Europe for sure. I could appreciate how friendly and helpful the people are. I know now why they have these big pick-up trucks: to pull their huge trailer anywhere in the mountain. The food isn’t great and it’s not going to change I think, we struggled to find pasta in restaurants all the time. It’s really a burger & food chains land, no doubt! But the USA are big, huge, it’s a big sky country with amazing landscapes, reason why I came back with more than 1300 photos ...

Last miles of gravel road on the way to Antelope Wells

It’s a short video I did while biking to show the scenery around us for those last miles of dirt road. The speech is in French but due to the wind you can’t get most of it anyway ;-) enjoy the landscapes !!!

We are in Silver City, around 120 miles to go to Antelope Wells so we will be done by tomorrow. It’s sad it’s so soon the end but at the same time I’m happy to think I’ll be able to do something else than just riding every day. I have to catch up with sonme many emails, and you’re all waiting for the pictures which I never forgot to take every single day! Even if I’m riding fast ;-) I’m taking pictures all the time so they could catch up with me …

Simon had to get a ride today to Albuquerque since he had different problems with his bike. I don’t know the details since we weren’t biking together (I was trying to make it to Pie town before 3pm to get some food… which I did). So we will meet again in Silver City tomorrow evening or the day after.

I found a new challenge for me, to make it to Silver City in one day… 180 miles and a few climbs of course. Stay tune on the live tracking to see if I’ll make it or not ;-) I’ll start early tomorrow morning in the dark with the food I have left…

The story of how I got the news about Simon in a town without any mobile reception, is simply: the Spot device! Simon’s dad contacted different people here to forward me the news when he spotted me in Pie town, looking for the shops & services next to where I was. I was really starting to wonder where Simon was…

Since I started the trip I mostly enjoyed every day without suffering much compared to Simon (and Ollie for the time he spent with us). But New-Mexico is something different! I left Simon who wanted to make a shorter day for his calf muscle after Platoro and I biked all the way up to La Manga Pass, arriving at the top before 9pm. I spent the night with a family camping a mile out of the road who offered me beers, chicken, hot-dogs… A dream night before what I can call my hardest days!

The day afte started with a turn I missed and ended up doing a few extra miles and climbs for “free”… Then I had to push my bike a few hundred meters for the first time.. grrr I was upset! And then, with the rough road my bike computer reset itself twice in the middle of check points on the map. It was such a bad day… I was so angry! And for the happening of the day, I biked hard to make it to El Rito for the night ...

The Great divide route changed this year with a new route to avoid a long part of Highway. We heard from the racers that it was even harder then they thought. I was really willing to do it, so we split and I went on my own to the Flathead valley in Canada, just after Sparwoods. The valley is really wild. You can see the difference and feel that there is nothing close to you. Just bears, moose, deer…
When I left Simon & Ollie, it felt a bit strange to be on my own and to bike into this wild & remote spot… After a few heavy rain showers I found a cabin (Butts cabin) where I could crash for the night, warming up with the stove and drying the wet stuff from the previous camping night. It was a good start!
Later during the evening it started to rain again, and it kept raining until 4.30am when I woke up…. grrrr… I had a hard time to get out my sleeping bag! But by 6.30am I was out, in the rain and ... 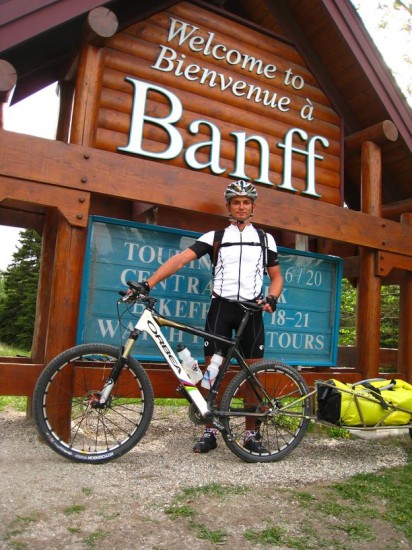 After the climb comes the downhill (or almost should I say) to Banff on the Goat Creek trail. It was a nice feeling to be i nthe forest biking with the trailer ... 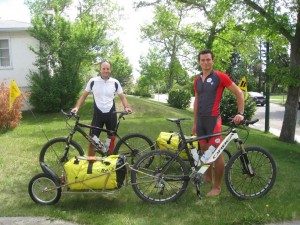 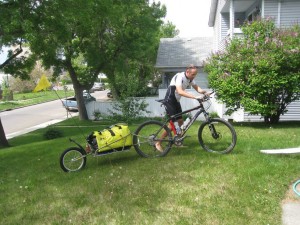 Tuesday morning we were before 10am at MEC to hopefully get the trailers. We were crossing our fingers, and finally they were here! We unpack everything right in front of the main door and assembled them in half an hour. Then we had to get back home to send 43kg of gears down to Phoenix before being able to leave. But yeah, there it started… Putting the trailer on the back of the bike was quite…. how to say… surprising! It’s heavy!!! It’s really heavy… How are we gonna do it. But let’s give it a try for the first day to Canmore on a paved road.

We left Crystal & Shannon who hosted us during almost one week (thank you so much for your hospitality and all the good time & parties we had!) and started cycling toward Canmore on the 1A. About an hour later we got a huge rain with thunders… 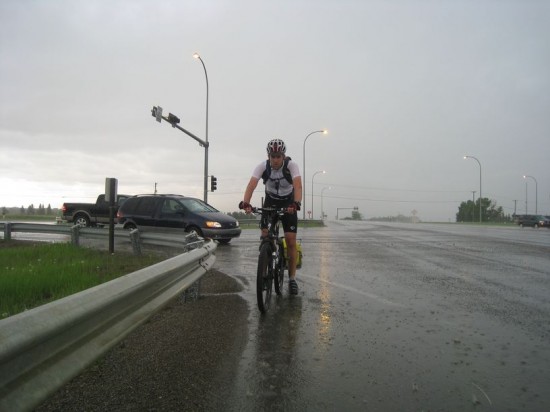 It was raining so much that someone stopped and asked if we needed a ride somewhere ;-) Thanks but we have to go through this rain and to Canmore on ...

Simon bought his bike today! So we are almost set, just missing the trailers which are supposed to come on Monday. We also bought a lot of different things to have some spare parts for the bikes, clothes, accessories for the bikes. It was a full day for Simon VISA card who paid everything ;-)

Simon also discovered the pros & cons of using cleats as everyone does on the first ride… But the bike doesn’t have any scratch, neither Simon!